A bad case of cabin fever

It’s been so cold lately that I’ve had the wood heater going for days. The mountain has been covered with snow and even down here at Lauderdale we’ve had several hard frosts. So there’s been lots of snuggling with Harry, lots of dashing outside to the woodpile and then back in again to get warm. The occasional foray to collect eggs – Dolly, splendid girl that she is, is still laying despite the frosts. And of course a daily walk (very brisk, to warm up) on the beach with my neighbour’s dog Cookie.

But as a result of all this (mostly) staying inside, I am now suffering badly from cabin fever. Even the thought of a day in front of the fire with a book doesn’t appeal to me. So I’m going into the city this morning to have a look at a Patricia Piccinini exhibition, and maybe then to the museum to see the Patrick Hall exhibition. And then a walk somewhere other than the beach.

Apart from the cabin fever, it’s been a good week. I finished the copyedit of Sunker for the Americans, and sent it off. I think I finished the copyedit of Fetcher for the Australians, but will come back to it in a couple of weeks for a final check. I’ve seen the final cover art for Fetcher, and it’s beautiful and fits in really well with the other two books. And I understand there’s a sketch of the American cover for Sunker coming soon.

Plus I had a meeting for the Tasmanian Book Prize and the Margaret Scott Prize with Matt Lamb (editor of Island magazine) and Professor Hamish Maxwell-Stewart (historian and Associate Dean at the Uni of Tas), and after not-too-much wrangling we managed to agree on a longlist for each prize. Those longlists will be published in about a week. Now of course we have to get them down to shortlists of three or four. That’s going to be considerably harder. Next meeting there’ll be blood on the floor, no question.

Last but not least, I got a load of wood in, which always makes me feel extra-secure in winter. Here’s Harry lording it over the mice and cockroaches. 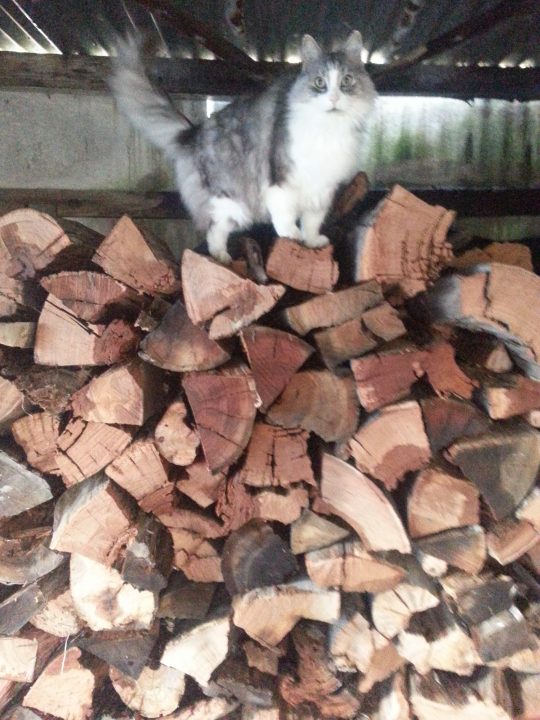