My face aches from smiling so much and my hand aches from signing books but I am happy. What a launch! Tasmania loves to support its writers and I’ve had some terrific publicity over the last few weeks. As a result, people turned out in droves for the official Australian launch of Museum of Thieves the day before yesterday.

The Bond Store (which was the place where the authorities of the new colony of Van Diemen’s Land used to lock up the rum so that neither the soldiers nor the convicts could get hold of it) looked wonderful, thanks mainly to Mark Fitzpatrick from the Tasmanian Museum and Art Gallery and his work on creating the podium.

Bonnie and Ella did a terrific job with their reviews of the book. A fellow author, David Rish, emailed me later: ‘I thought the event was highlighted by the girls with their twin reviews, though I would have liked them to take opposing views and then come to blows, just for the drama you know.’ 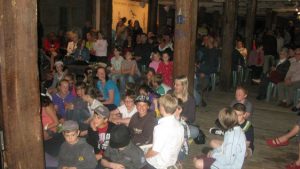 The Bond Store begins to fill up

Annette Downs was brilliant (if you want a book launch to go off without a hitch, ask a theatre director to run it), Eva Mills from Allen and Unwin said such nice things about me that I am still blushing, Chris Pearce and Janet Grecian from the Hobart Bookshop worked away at the side selling books (they sold out their entire stock), Tim Sprod and Anna Majdanska (old friends from Rabaul days) handed out drinks, Mark Fitzpatrick was carrying more chairs every time I looked (after a while it was standing room only), and Essie Kruckemeyer worked the door. 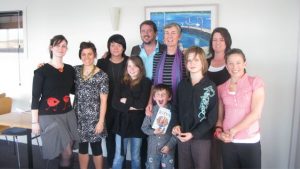 Me with nephews and nieces

Oh yes, and there were huge numbers of assorted Tanners there, from various parts of Australia and the world, which was very very nice because we don’t often manage to get together as a family.

Thanks to all those people, it was a terrific morning. Now I’m having a few days off before I get back into the copy-edit of City of Lies. And next Saturday I’ll be in Launceston (in Northern Tasmania, where I grew up) to speak at Fullers Bookshop.

Here’s a bit more from David Rish, a very funny man, about his trip home from the launch: ‘I dropped into the St Joseph’s Church fair walking back to my car afterwards  and a woman in a neckbrace who was working on the plant stall tried to wrestle my copy [of Museum of Thieves] from me. I kicked her in the knee and escaped up Macquarie  Street, book intact but when I got home my 22 year old wrestled it away from me (she’s got a black belt in tae kwon do so there was no point resisting) and disappeared into her room with her prize, emerging a few hours later with a huge grin on her face. As Olive is an avid fantasy reader, and very good critic, I think you can be sure of winning over that post-teen market too. Eventually I’ll be given a chance to read it too and I’m really looking forward to my time alone with  The Keepers.’