I’m going to write about India in a couple of different posts, because it deserves it. Not that I saw anything or anywhere other than Delhi, but that is a country in itself, with a population as big as Australia. *gulp*

Children at the Red Fort, Delhi

First, I should tell you that I loved it. I have never been anywhere so exciting, so full of life. Delhi left me speechless.

My first day there I was in shock. The ways that I usually go about engaging with the world – smiling at strangers, talking to children and stray dogs – were no longer possible. It was like being thrown into a flooded river – a river of life that is bursting its banks. Small children with even smaller children in their arms. Old men with crooked eyes and dusty skin, tapping on the windows of cars and pleading for money. Women who look as if life has battered them from the moment they were born, without let up. All of them thinner and poorer than I could have imagined.

And at the same time, there is wealthy India and middle-class India, well-fed and well-educated India, and some of the nicest people I have ever met. It’s all thrown in together, in a triumph of the human spirit and the human immune system. And did I mention the noise? 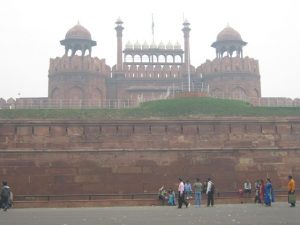 It was all so big and overwhelming for the first couple of days that I felt ridiculously proud of myself when I managed to achieve something. Find an ATM. Buy a book (Raj by Gita Mehta). Visit the Red Fort, which was glorious, but hard to photograph through the smog. Hard, too, to picture what it was once like, with the air clear and the Moghul emperor on his peacock throne made of gold. And elephants fighting in the gardens below for his pleasure.

After the Red Fort I went to the Jain temple across the road where there is a bird hospital. Hundreds of pigeons in little cages with broken wings and crooked legs, and a young veterinary surgeon tending them out of small medicine bottles. 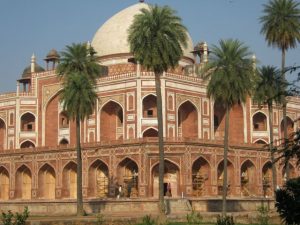 The traffic in Delhi is as astonishing as everything else. No one takes any notice of the traffic rules or the traffic lanes. On a two-lane stretch, I counted five rows of cars/auto rickshaws/buses etc. Everyone just heads for the nearest gap and blows their horn until they get into it. But there’s very little aggression – not like there would be in Australia in such conditions. Hardly anyone yells or swears or gets out of their car and hits whoever has cut in front of them. They just expect the unexpected and keep driving. It’s like a great whirling dance, and it works surprisingly well.

Um – did I mention the noise? 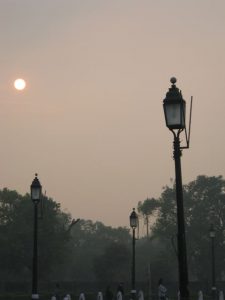 I saw kites (the birds), which I have read about in so many books. They were circling something by the side of the road, diving in and out again as we drove past. Big brown birds, a bit like hawks, but with that sheen that a lot of Indian birds seem to have. ‘Horrible birds, they are attacking something,’ said Bandana Sen, a librarian who had stolen me away from Bookaroo and was taking me to her favourite bookshop. (The Book Shop, 13/7, Jor Bagh Market, New Delhi – 110 003. Proprietor: Nini Singh)

The kites, by the way, whistled as they soared, just like they do in books. And I saw a peepul tree, with leaves that come to a long point at the end. And dogs, skinny, mangy, short-haired creatures that lie in the dust in the same patient, curled-up, enduring position.

And then of course I go back to my hotel, where the air is perfumed and the ends of the toilet paper are folded, just as they are folded in hotels all over the world. Who on earth invented the idea of folding toilet paper ends?

It seems to me that there can be no other place on earth like Delhi. I couldn’t live there, but I would not have missed it for the world. And I will definitely go back.