I’m just back from a weekend in Launceston (Northern Tassie) where I spoke and signed books at Fullers Bookshop. 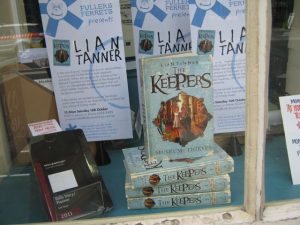 The window of Fullers Bookshop

Launceston is a city that has kept a lot of its old buildings, and Fullers fits right in. It has a small window and from the outside it looks like the sort of place that you find by accident and turns out to be run by gnomes. (I didn’t see any, but that doesn’t prove a thing.) One of the people who came to the signing was a friend I used to go to school with many many many years ago, which was rather nice.

The grounds at the Cataract Gorge

I was born in Launceston and lived there until I was fourteen, so it’s a place that crops up a lot in my dreams. Here’s one of my favourite places, the Cataract Gorge, which is almost in the middle of the city. There are peacocks and a suspension bridge, and, further up the gorge, a very old power station with big cogged wheels, that looks like something out of a steam punk novel.

I drove home this morning, down the Midlands Highway, which we used to drive down nearly every school holiday when I was a kid, on visits to my father’s family in Hobart. 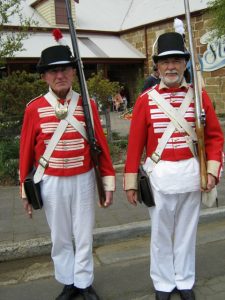 My father was a born storyteller, and he kept us entertained pointing out real things (the Halfway House, the Disappearing House) and totally made up things (the house where the three little pigs lived). Today I went via Oatlands which was having its Spring Festival. The wind was bitterly cold, but the sun was shining, the sheepdogs were working and the mill wheels were turning.

Did I mention that Tasmania is an exceptionally beautiful place?

Back to work tomorrow. I just have to finish off the copy-edit for Book 2, City of Lies, then I can get back to the third book, Path of Beasts.