Here it is almost the end of the year, and I’m taking stock of what I’ve done with my writing over the last twelve months, and where I’m going next year. As always, the former is much easier to work out than the latter.

There are so many possible paths, that’s the thing. So many books that nibble at me, wanting to be written. That’s one of the reasons why my plans for 2019 don’t include starting a new trilogy.

I love trilogies – I love how you can do so much with a story and send the characters over such a vast journey when you’ve got three books to do it. I love living with familiar characters for three years or more. I love starting the second and third books already knowing who the main characters are, what the world is, and what the magic systems are.

But during that three years, any number of other ideas crop up, and I have to say to them, ‘Not yet.’ And when they reply, ‘So when?’ I have to answer, ‘It’ll be at least another two years.’ Or ‘Another twelve months or so.’ At which point they wander off in disgust, looking for a writer who will treat them better.

So no trilogies next year. Instead, I’m intending to write (and am already well on the way with) a couple of shorter books. I’m always aware when I go into schools that the length of my books is a challenge for some kids. They’re fine for good readers, but 60,000 words can look pretty intimidating to someone who is not entirely sure of their reading ability.

Plus a 30,000 or 40,000 book seems so quick to write in comparison. So that’s what I’m aiming for. I’m not saying that I won’t write any more of the longer books – I’m sure I will. But for the next few months at least, I’m giving myself something a bit easier.

I’d also like to get another picture book finished next year. Once again, I’ve got any number of ideas – it’s just a matter of seeing which one/s I can make work to my satisfaction.

But for the next week or so I’m eating a lot, reading a lot, and not much else. Harry is doing the same but without the reading. We both wish you a very merry Christmas, with friends, family, much loved pets, or much loved books. 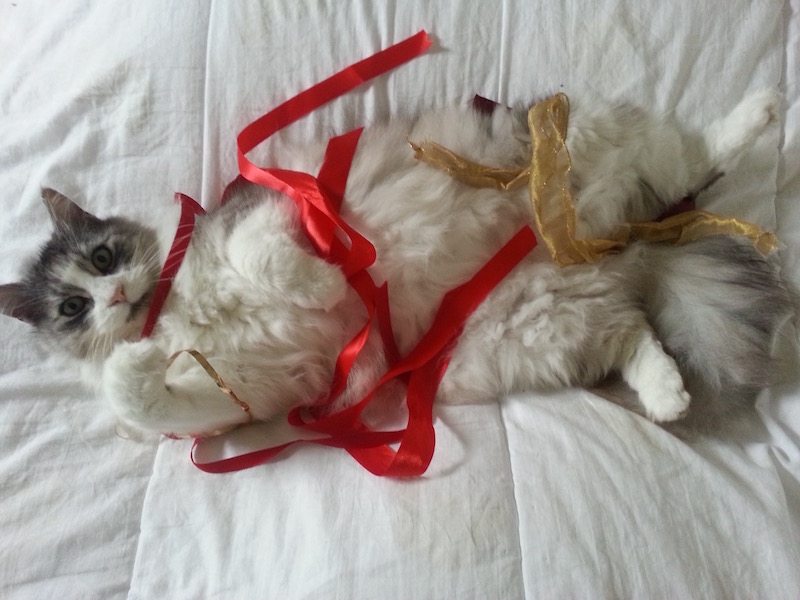 For children, young adults and adults. Wonder, by RJ Palacio. I’ve heard people mention this book, but have only just got around to reading it. It’s the story of a boy with a very deformed face going to school for the first time, and the challenges he faces. It’s also about the challenges of the people who befriend him. It’s gorgeously written, wise and kind, as well as funny. Thoroughly deserving of its reputation.

For adults. Educated, by Tara Westover. This is an extraordinary memoir about the relentless grip one’s upbringing can have, and how hard it is to escape, even when the intellect knows better. It’s also a fine explanation of how a lack of education can become multi-generational, and the effect of this on people’s credulity and beliefs. The story itself is chilling – her brother’s violence, her father’s mental illness, and her family’s ability to deny those things and blame the victims, while holding themselves up as chosen by God, are disturbing to read, but fascinating.