I was reading a self-published novel a while back where the hero was dashing across the country on his horse, on a moonless night …

There was a reason why country people used to hold dances at the full moon, in the days before cars and electric torches. It was so they could see to get home.

Years ago, when I was working for the Salamanca Theatre Company, we were on Flinders Island, north-east of Tasmania. We’d just finished a performance in the school gym, and because I like being on my own, I decided to walk back to the hotel rather than go in the car with my fellow actors. Being a city girl, I hadn’t taken account of the fact that I was out in the country with no street lights and no moon. It took me two hours to walk what was really quite a short distance, mainly because I kept straying off the road and into the ditch on either side of it.

I couldn’t see ANYTHING. Not a single thing. The only way I knew I was still going in the right direction was because I could feel the road under my feet. (Except when I was in the ditch.) By the time I got back to the hotel they were just about ready to send out a search party.

So, dashing across country on a horse? Nope. You’d break your neck before you’d gone a mile, and so would the horse.

Which of course brings us to research.

Like most fantasy authors, I’m constantly writing about things that I know nothing about. Submarines, ice breakers, brizzlehounds. So I do a LOT of research. Not necessarily at the beginning of the process, because it’s no use spending hours researching something that I might cut out in a later draft. But somewhere along the way, I need to find out the details of whatever it is I’m writing about.

And not just the technical details about wind turbines and dive wheels. Researching sense details is just as important, if not more so. What does it feel like to crawl through long grass? What do the iron steps of a ship’s engine room sound like under my feet? What does wind feel like on my face, and hail and sleet?

This past week my research has led me towards quills. So I made one out of a magpie feather and practised writing with it. It was harder than I expected, and messier. Someone who used them regularly would probably be a lot neater, but that’s fine, because Duckling has never used one before either. 🙂 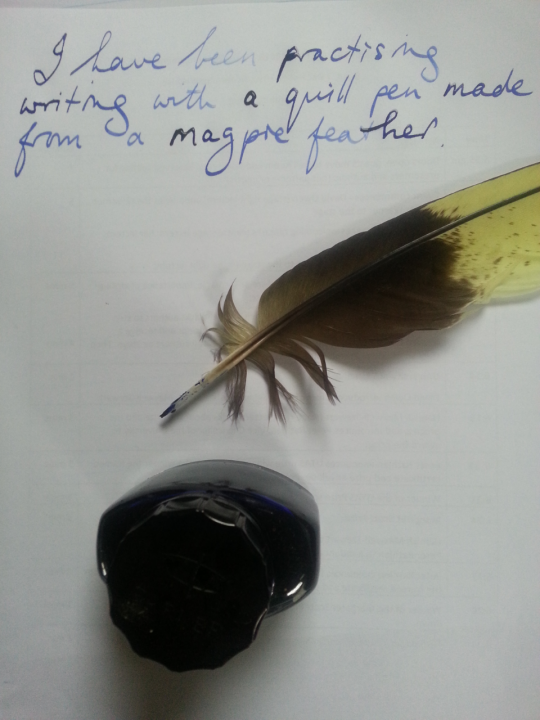