It’s been a busy week. Well, busy by my standards, anyway! I’m writing Book 3, starting to do promo on Book 2, and still talking about Book 1. Would I change my life for anyone else’s? Noooooooooo!

So – Book 3, Path of Beasts. (I know that none of you have read Book 2 yet, but this is where my head is at the moment.) It’s interesting trying to work out a satisfactory ending for this book. Endings are always tricky – like beginnings – but it has only recently struck me that this ending has to wind up not just the book, but the whole trilogy. So it has to be big and solid and extra-satisfying.

I’ve just finished the fourth draft, and I think I’m getting there. So many loose ends to tie up! I’m sure I’ll miss a few of them.

As for Book 2, City of Lies, I’m just about to head off to Melbourne to do a promo video introducing the book to Australian booksellers. Of course I don’t really have to go to Melbourne to do it, but it’s a nice excuse to visit family and friends. 🙂 It’s rather nice doing the video too, as booksellers here have got right behind Museum of Thieves and supported it very enthusiastically. So now I get to say thank you to them, as well as introducing City.

(BTW, while I’m in Melbourne, Laurie Brinklow from Prince Edward Island is going to house-sit for me. Here’s her blog as she treks around Tasmania.) 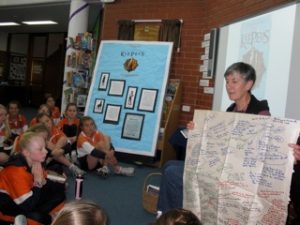 Talking to the girls at Fahan

On Wednesday I visited Fahan School in Hobart. It’s a private girls’ school and I spoke to grades 3-6 about Museum, read them a little bit from City and showed them a couple of the new illustrations, including a very gruesome pic of a slommerkin.

One of the things I like to talk about in schools is creativity. We tend to behave as if there are creative people and uncreative people, and I think this is wrong. In my opinion, people who think of themselves as uncreative just haven’t found out how to tap into their own creativity. It’s a skill like everything else. And the more you practise, the better you get at it.

Incidentally, the paperback of Museum will be out soon. In the US it has the same cover as the hardback, but here it is slightly different. I’ll get hold of a jpeg and put it up, because it’s rather nice.