Well yesterday was perfect weather for my not-a-launch. I sat outside the Hobart Bookshop with my teapot and my signing pens, and chatted to whoever turned up, and enough people came to make me feel wanted. 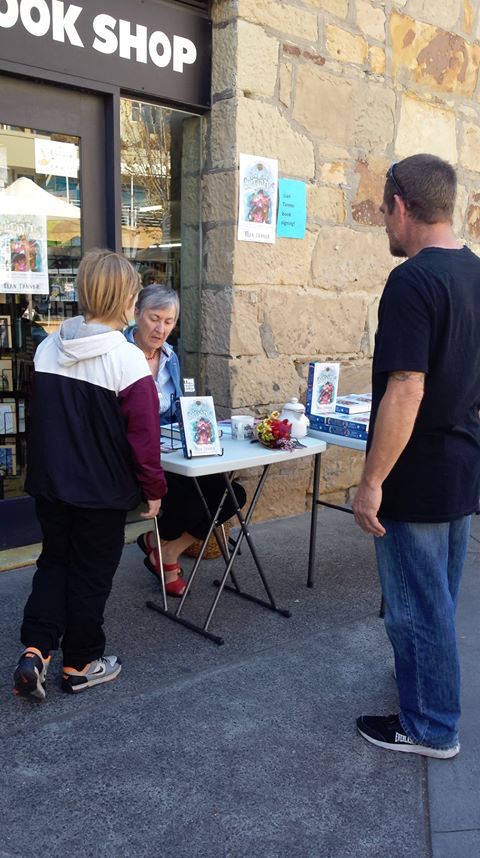 One of the nicest things was seeing people who come to every launch, who turn up year after year to say hello and buy books and take photos. Ella started off reading the Keepers when she was in Year 3, and is now in Year 11. I only see her once a year, but she feels a bit like an old friend. Same with Jacinta and Martyn, adult sister and brother who love fantasy (Jacinta took these pics). 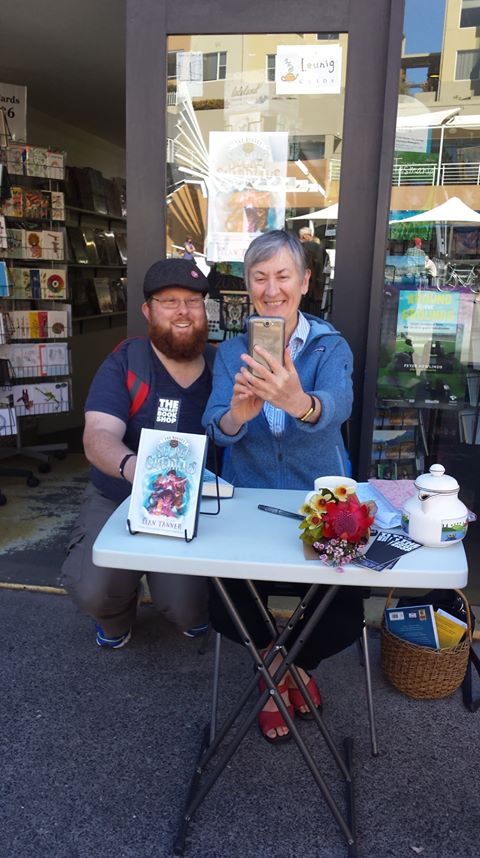 And then there are friends, and teachers, and teachers who have become friends because of the books, including Mary who let me read the entire manuscript of Museum of Thieves to her Lauderdale primary school Year 5 class roughly ten years ago. It was an early draft of the book, so it was very different from what ended up being published. And part of that difference was due to her kids, who gave me feedback and talked about what they loved and didn’t love. I read it to them over two weeks, and their reaction was my first inkling that I had something fairly special on my hands.

Now it’s back to writing, and putting the finishing touches to the website. I think it’s pretty much done, though if you stumble across something that is not working, please let me know. The free-Keepers-story-for-subscribers is working at last (because I just tested it), but I don’t think people who subscribed earlier will have received it. 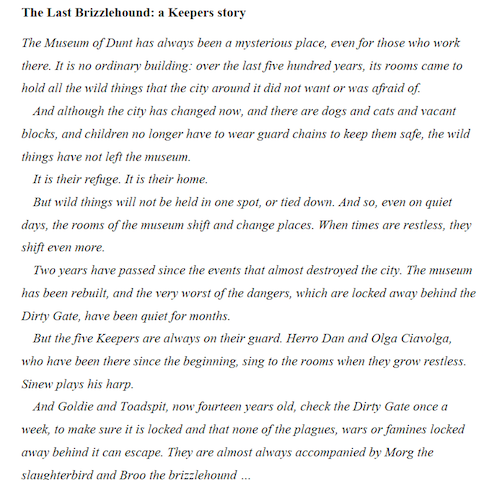 So if you’re a subscriber and you’d like to read ‘The Last Brizzlehound’, leave a comment and I’ll email it to you.

For kids (middle-grade): Tuesdays at the Castle by Jessica Day George. This has similarities to Museum of Thieves, in that the rooms move around and change, according to the mood of the castle. It’s the story of Princess Celie, who is trying to map the changes. But when her parents disappear, her knowledge of the castle is the only thing that might save the kingdom. I really enjoyed this – Celie is a great heroine, the villains are loathsome and the ever changing castle is wonderful.

For adults: I found two terrific books this week. The first, Girl Waits with Gun by Amy Stewart, is the fictionalised story of Constance Kopp, one of America’s first female crime fighters. She’s a tall woman who has been isolated from the world since a family secret sent her and her sisters into the country fifteen years ago. But when she comes up against a ruthless factory owner, she finds she has a knack for fighting back. It’s beautifully written, often funny, and Constance is one of those splendid heroines who suffers no fools.

The second was Dear Mrs Bird by AJ Pearce, set in London in 1941. Emmeline Lake dreams of becoming a Lady War Correspondent and when she spots a job advertisement in the newspaper, she seizes her chance. But after an unfortunate misunderstanding, she finds herself typing letters for the formidable Henrietta Bird, the renowned agony aunt of Woman’s Friend magazine. Also well written, also funny, but immensely moving, too, in its depiction of London during the Blitz, and the way people coped with it.