Writing stories is one of my all-time favourite things to do. I particularly enjoy getting my characters into trouble and writing exciting action scenes. But I also love the bits that come before the writing, especially the moments of inspiration that leap out at me from unexpected places.

Here are some of the ways I find those moments. 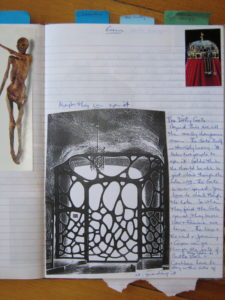 When I’m thinking about a story – especially a story as big and complicated as a novel – I start by picking up ideas from all over the place, and putting them in a scrapbook.

At this stage, I don’t know what I’m looking for. I wander through books and streets, along bush tracks and wharves, through convict ruins and memories. I collect faces and animals and buildings, and anything else that catches my eye.

Some of those things end up in the novel, some don’t. Some go in just as they are. Others change, so that no one but me would recognise where they came from.

Here’s a page from my Museum of Thieves scrapbook. This picture inspired the Dirty Gate.

Dreams
I like to take notice of my dreams – or rather, the tattered leftovers of dreams that are still in my head when I wake up. Sometimes they aren’t at all useful. But every now and again they show me something that turns into a book. 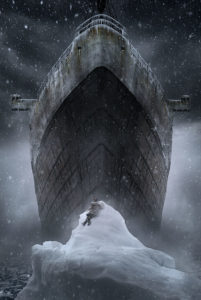 The Hidden series (aka the Icebreaker series) began as a dream. I don’t remember the whole dream, but when I woke up in the morning I had a picture of a ship in my mind. An ancient, rusty ship that had been sailing the same course for years and years.

The third book in that series (Fetcher’s Song/Battlesong) also started with a dream. Again, I don’t know what the dream was about, but I woke up with these words running through my head:

It was New Year’s Eve, and the last of the fortune-telling ducks was dead.

Weird, huh? But it turned into the story of a gallant little family of performers, trying to keep the songs and stories of their country alive. (There were no ducks in the final story – they were just the inspiration. It often happens like that.) 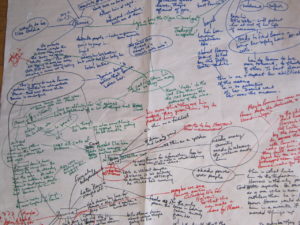 So, as well as the scrapbook, I use big sheets of butcher’s paper (newsprint), and huge felt pens. I scribble lines and circles all over the place, and question marks. I write down ideas as quickly as I can, so as not to think too much. This is a good way of coming up with answers to questions, or getting myself out of a corner if I’m stuck.

Here’s one of the sheets of paper from when I was plotting City of Lies, the second book in The Keepers trilogy.

Asking questions
I ask a lot of questions when I’m thinking about a book. Some of them turn out to be useful, some I never find out the answer to, and some don’t make any sense at all when I look back at them.

Here are a few of the questions I asked when I was working on Accidental Heroes:

How long do you have to stay in the Strong-hold to be trapped in the curse? Overnight? Three days? A month?

What happened to the people who lived in Neuhalt before the invaders came?

Does the Young Margrave join the Hunt?

What are the whispers that Pummel hears?

Does everyone in the Strong-hold forget everything at the end of every day? Do they have to write notes to themselves so they’ll remember? (I really liked this idea, but it made the story too complicated, so I ended up throwing it out. Maybe it’ll go in another book.) 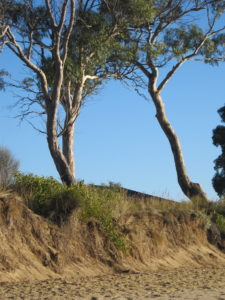 Don’t ever let anyone tell you that daydreaming is a waste of time. To be a writer, or an artist of any sort, you have to be a good daydreamer. Sometimes the best way to get ideas is just to sit and look out the window, or walk on the beach and let your mind wander.

That’s where stories come from – if there was no daydreaming, there’d be no stories.