When I was just getting started as a writer, and had pretty much no idea what I was doing, I always had this sneaking suspicion that other writers had a secret weapon, and that if only I could find out what it was, I’d be okay.

Turned out I was right. The secret weapon was structure.

Structure’s a funny thing – it sounds serious and important, but really it’s just about keeping your reader interested. In other words, structure is all about good timing. Where’s the event that starts the story? When do you introduce a new twist? Where are the big turning points that send things in new directions? Where’s the climax, and is it big enough and unexpected enough?

The reason this is on my mind at the moment is because the first Bodyguards book is now a manuscript of 65,000 words, which is book length. But it’s not yet working as a book. The beginning is fine. The end isn’t quite there yet. The middle is a mess. And my deadline for handing this book to the publisher is October 1st.

This is when I start looking very seriously at structure.

But there’s another problem, which I have to address at the same time. My apparent villain is the Harshman, a sort of ghost made from the bones and sinews of long-dead warriors. He’s been summoned to life by the real villain, who is hidden from view, and I haven’t quite figured out what his powers are and how he can beaten. Or even if he can be beaten. If I can work that out, I think a lot of the structure will fall into place. So that’s my job for this afternoon. In between pruning the apple tree and going for a walk. 🙂

Other news: Sunker’s Deep is coming out in the US/Canada in just a little over two weeks time (August 16th). My American publishers, Feiwel & Friends, let me give away ten copies, which was fun, and there’s also a giveaway on Goodreads. And a couple of days ago I received a box of author copies in the post. Don’t they look beautiful? 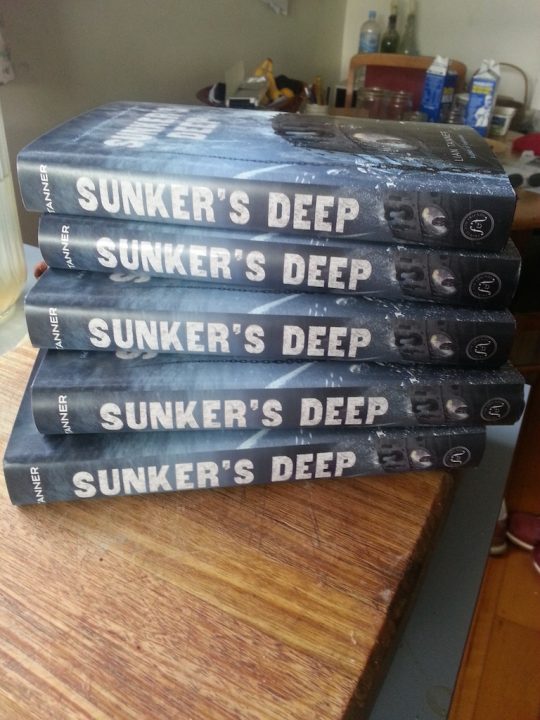 Meanwhile in Australia, this series is getting new covers. The current ones are gorgeous, but it never hurts to have a series re-released. If you’re interested in how the publisher goes about choosing the new style, the artist, etc, Allen & Unwin are blogging about it. http://www.thingsmadefromletters.com/2016/07/15/diary-of-a-series-redesign-book-cover-design/

2 thoughts on “A secret weapon”