How exciting – we’ve had our first entry! But don’t worry, there’s still a little over two weeks to go, so you’ve got plenty of time to get yours in.

This first entry came from Chelsea, who is 13, and it’s a quote from the very end of City of Lies.

"But neither would she hold back. She would fight the Fugleman in her own way and with all her strength. Who was she? What was she? She wrapped her fingers around the bird brooch. There was only one possible answer. 'I'm Goldie Roth,' she cried. 'I'm Fifth Keeper of the Museum of Dunt!'"

As Chelsea said, the colours didn’t turn out as well as she’d hoped in the photo. But I just love the quote, and I’m glad she chose it. It’s such an important moment for Goldie, and it sets up everything that happens in the third book.

Now I also received something else interesting during the week. A couple of weeks ago I was at a friend’s book launch, and two girls came up to me and said, ‘We’ve been doing animations in class, using the characters from the Keepers.’ Their names were Eleanor and Juniper, and they are in Grade 3/4 at Goulburn Street Primary, which is in Hobart.

So their teacher emailed me the little movie the class had made. It’s very clever the way they did it. Here’s what the attached letter from Juniper and Eleanor said:

‘We chose the characters and cut them out (we hope you don’t mind) and then we put them on our background that we used our imaginations to draw. The descriptions in the book helped us imagine what the scenes looked like. We used a program called Monkey Jam. Then we moved the figures a tiny bit at a time and took a photo each time we moved it. When all the photos were put together it made a very, very, very short film. We hope you like our animations as much as we liked your book.’

Isn’t that a cool thing to do?  I just need to check with their teacher to see if I’m allowed to upload the video to YouTube – if I am I’ll add the link to this post.

In the meantime, here’s Harry enjoying a bit of late night reading in front of the fire. 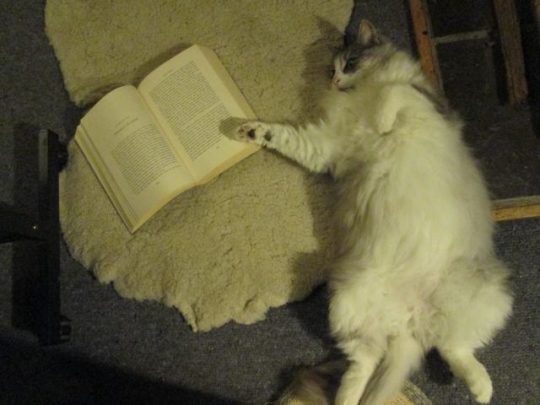 Harry-le-beau halfway through 'The Dragon Keeper' by Robin Hobb