It is now almost exactly four months till Ice Breaker comes out in Aust and NZ. This is always such an exciting time, as I get to see the cover (which I showed you a few weeks ago) and other good things. Yesterday the publishers sent me a copy of the map that is going to be in the front of the book. I drew a rough version, which they sent to artist Seb Ciaffaglione, and he made it look gorgeous. I do like maps in books  – there’s going to be one in each book of the trilogy.

As for Claw, I’ve just finished the first draft. This is an exploratory draft, where I let myself go off on all sorts of odd interesting tangents, just to see what happens. In my next draft, I have to start making sense of it all. Eek! 🙂

Meanwhile people keep sending me nice stuff. This time it was Lilli, who is studying the Antarctic at school, and built an icebreaker for her assessment task. It took her all weekend and she got an A! 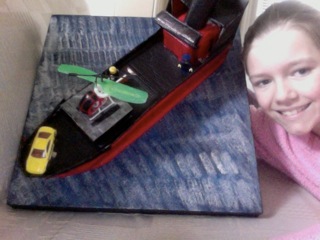 Lilli’s icebreaker is called ‘Brise-Glace’, which means ‘icebreaker’ in French. The icebreaker in my book is called ‘Oyster’, because it contains a valuable secret.