When I go into schools, kids often ask me, ‘In your books, who is your favourite character?’ It’s an impossible question to answer, because I love them all, even the villains. Sometimes, especially the villains. But one of my longtime favourites is Pounce, who first appears in City of Lies (Keepers trilogy #1) and also plays a major part in Path of Beasts (Keepers trilogy #3).

Pounce is a street kid with a brutal history. He’s probably about thirteen or fourteen years old, and he trusts no one and cares for no one – except his much younger friend Mouse. And it’s this love for his friend that makes him such an important part of the story. He betrays people but he also saves them, almost despite himself.

When I was writing City of Lies, I came up with some bonus extras, and Pounce’s recipe for rat stew was one of them. It’s roughly based on the way young midshipmen in the British Navy used to catch and cook the ship’s rats when food was scarce. (Illustration by Melbourne artist Sebastian Ciaffaglione.) 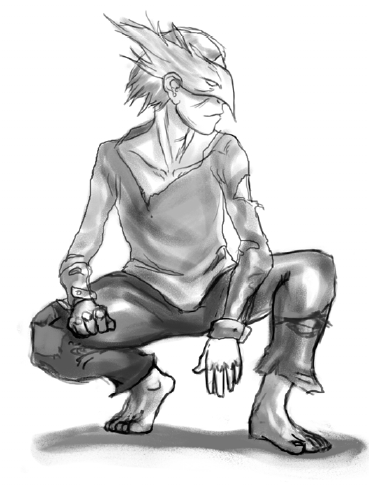 ‘What?’ said Pounce. ‘You ain’t never eaten rat stew? Well then, you got a treat comin’. Rats is not as sweet as rabbit, of course. But they is much better than cockroaches. The trick is to cook ’em right. ’Ere’s ’ow to do it.

‘First ya gotta catch yer rats. It ain’t easy, cos they is quick and clever, specially down ’ere in the sewers. But I got a special system, see, with a scrap of biscuit for bait, and a nice little noose. There’s times me and Mousie would’ve starved without that noose.

‘When you’ve caught two or three rats and killed ’em, ya gotta skin ’em and clean out their guts. Ya know ’ow to do that, don’t ya? Course ya do. Everyone knows that!

‘So once you’ve got ’em skinned and cleaned, ya cut ’em into bits and roll ’em in flour. Next ya need some bacon fat. Best place to find that is the rubbish bin out behind a butcher shop. Or sometimes ya can beg some from one of the street stalls.

‘If ya can’t find bacon fat, go down to the wharves and nick some of the slush that the sailors use to grease their masts. But don’t forget to pick the splinters out of it.

‘Now heat up the fat in a tin can over the fire. Chuck in some onion if you’ve got it. Drop in the bits of rat and stir ’em with a stick till they is nice and brown and crispy on the outside, and the smell is makin’ ya dribble.

‘Then chuck in a couple of carrots and some water – not too much! Stir it with yer stick until the water’s just bubblin’, then bang a lid on top of the tin, move it to the edge of the fire so it don’t boil too hard, and sit back with yer hands on yer belly like a fat old lord until the rats is cooked.