On Friday I had an email from my US publisher about Icebreaker:

‘Great news: we are back to press for a second printing!’

This is good, given it’s only been in the shops for a little over a week. It means the book is getting off to a very nice start in the US, so we are all feeling pleased.

Also feeling pleased about the Australian edition of Fetcher’s Song, which is at last beginning to look like a book. I received the ‘first pages’ during the week – this is where the manuscript has been to the typesetter and is all laid out, but not yet bound into a book. This is my last chance to make changes, so I’m reading through the whole thing very carefully.

One of the things I love about this series is the way Allen & Unwin have designed the prologues, with a gorgeous steampunky border. 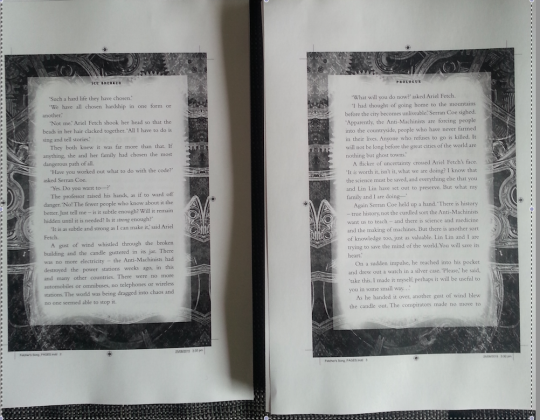 Fetcher has an in-store date of January 4th, 2016. Four months to go. Save your Christmas money! 😉

Third on the list of pleasing things, I’ve started plotting the new series – or at least the first book of the new series. I always plot in quite a bit of detail, but this time I’m trying something new – the noticeboard. 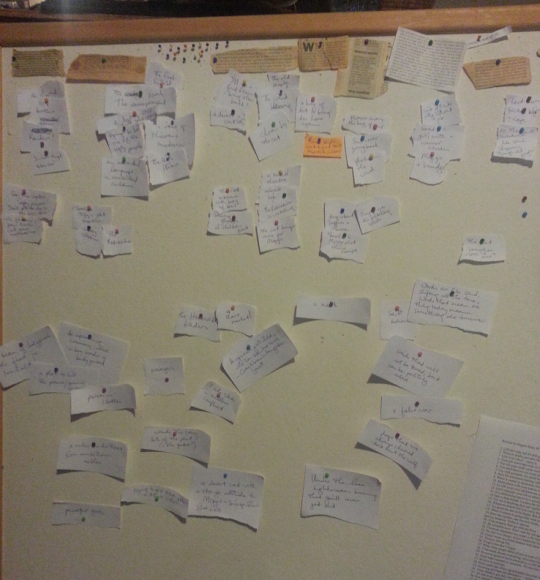 Stephen King has been very scathing about authors who plot. In his book On Writing, he says plot is a clumsy tool, a jackhammer that destroys the fossil of a story. He should know better than to make such sweeping statements. It might be the case for him, but it doesn’t apply to everyone. Some people plot, some people don’t – in my opinion it’s all a matter of temperament, and once the book’s finished the reader shouldn’t be able to tell the difference.

As for the notice board, I’m really enjoying it –  it’s a lot more fun than cards spread on the floor or on the computer screen, which is how I’ve done it in the past. There’s something about those little scraps of paper and the pins that encourages me to move them around, throw some out, add new ones, experiment … And on Friday I bought some coloured sticky notes, so all these white bits will probably end up being replaced by greens and blues and oranges.

What’s more, I spoke to both my Australian publisher and my agent, and they both really like the sound of the new series, so it looks like it’s goer. The first book doesn’t have a title yet.