Secrets, speeches and the new governor

So why is it so different? (I’ve been trying to work that one out all week.)

1. I really like the two new central characters, who kind of bobbed up out of my subconscious. They weren’t intended to be the main characters, or particularly heroic, so they came out of my fingertips interesting and fallible and quirky and a bit strange. The previous main character was a rather boring mix of Goldie and Petrel, carefully designed to be heroic, and therefore rather bland. Why did this happen? Because I was thinking too much. Trying too hard. Worrying about whether people would like her. (Note to self: this is a mistake. Don’t do it again.)

2. All the characters I’ve met so far really really want something. And they’ll go to extraordinary lengths to get it. What’s more, the things they want clash rather nicely. So – conflict, straight off.

3. There are lots of secrets. Oh how I love secrets! Especially the ones that, if they are discovered, will probably result in death or imprisonment. (That sort of thing makes people behave in all sorts of odd ways.)

4. I’m no longer trying to force particular characters into the story when they don’t want to go in. (see #1)

The curious thing is, I probably wouldn’t have found this story if I hadn’t started writing the first one. It’s all part of the process really, and it only seems like a backward step.

Anyway, this week I’m plunging further into it. All the most important characters are together now (I think), but so far they’re all hanging onto their secrets. Which is going to make things harder and harder for them. (Bahahahahahaha …)

Also this week I have to write a speech. We three judges have at last decided on the winners of the Premier’s Book Awards, and the announcements are being made at Government House on 2nd December. Along with the ones we decided on, there’s also a People’s Choice Award. That’s the one I’m introducing. No idea what I’m going to say yet, but I’m looking forward to meeting the new governor, Professor Kate Warner, who I have heard lots of good things about. And Government House always has nice nibbles. 🙂 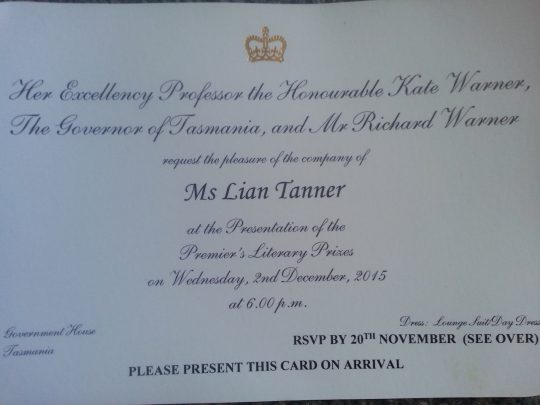 2 thoughts on “Secrets, speeches and the new governor”