Ugh. I’ve been away from my desk for three weeks and it shows. It’s always a struggle to get back into it. The words come … very … slowly. But the book won’t write itself, so I am sticking to it – with lots of breaks for cups of tea and walks around the garden.

Speaking of which … I came home from Adelaide to find that something had been chewing at my carrot seedlings. Hmm. Too much devastation for snails or earwigs. Maybe grasshoppers? But they usually prefer the small seedlings, whereas the ones being eaten were big. I went off to bed feeling as if I had slipped into a children’s story (‘Someone’s been eating my porridge …’).

Next morning I was in the garden again (yes, the words are coming VERY slowly) when my cat dashed past, chased by a grey, flop-eared rabbit (very small cat, very large rabbit). Mystery solved – I wasn’t in Three Bears Land at all, I was in Beatrix Potter country. There turned out to be two rabbits (the other one was pitch black), and they’d obviously escaped from somewhere. If they’d been looking little and lost and frightened, I’d have caught them, but they seemed to be having a nice time and were suitably plump, so I merely covered my carrots with bird netting and left the bunnies to enjoy themselves. 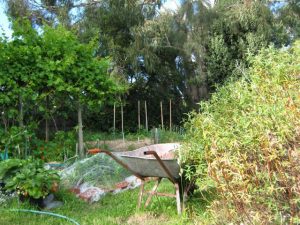 Yes, it’s probably irresponsible of me, and I’m not sure how long they’ll last on the lam (they look as if they’ve been loose for a few months). But I deeply disapprove of the small cages that people keep pet rabbits in, so have no intention of sending them back to captivity. Rabbits like to kick up their heels in the morning, and a rabbit kicking up its heels for the sheer joy of living is a sight not easily forgotten. (So if you’ve got a pet rabbit, go outside RIGHT NOW and build a decent run for it.)

I’m curious to know what other people would have done. Catch them? Leave them? Which is better, a short satisfying life with danger just around the corner and considerable risk of early death, or a long safe life with no real problems except boredom?