I don’t go anywhere without a notebook. I’ve carried one for years, because I never know when I’m going to see something or hear something or meet someone who gives me an idea for a story. I can be in the middle of talking to a friend, or at a movie, or on the bus, when I suddenly dive for pen and paper, desperate to write the idea down before it vanishes.

Yesterday I was looking back through one of my old notebooks, trying to find a note I half-remembered about an invisible dragon (because I thought it might fit into a story I’m writing). I found the note I was looking for, but I also found half a dozen other notes that have already grown into books.

I thought you might like to see some of them, to see the tiny beginnings that a book can grow from. I’ll start with the oldest one. 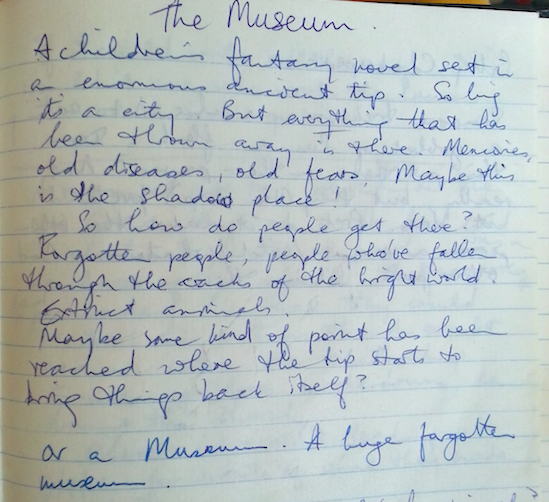 This was the very first note I made for the book that eventually turned into Museum of Thieves. See how my original idea was about an enormous tip, or rubbish dump? And then – I think I wrote the line at the bottom a couple of days later – I realised it shouldn’t be a tip, but a museum. So my first idea isn’t always the right one; I have to keep thinking about it until it feels right.

This next idea came from a dream I had – I woke up with a picture in my mind of an ancient ship sailing around and around the southern ice. 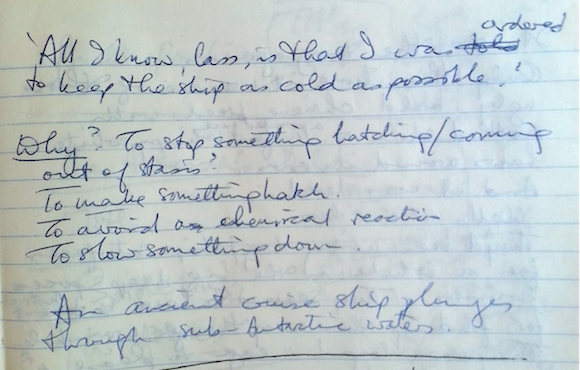 I didn’t know why the ship was in the ice, and in this note I was playing around with possible reasons. None of these reasons turned out to be the right one, and Ice Breaker was a book that changed enormously from the way I first thought about it. But that first image of an ancient ship kept going all the way through the changes.

The next idea came from a visit to Chicago’s Museum of Science and Industry. They have a real Second World War German submarine in the basement, and as soon as I saw it I knew I wanted to write a book set on a submarine.

As I wrote the story, the girl in the note became a boy, Sharkey, born on a lucky tide and blessed by the ancestors. And the book became Sunker’s Deep.

The third book in the Hidden series also came from a dream, and this was probably the strangest one of all. I woke up one morning with this sentence going round and round in my head.

I’ve got no idea what the dream was (probably just as well!) but the sentence made me think of a small travelling theatre company, down on its luck. It eventually turned into Fetcher’s Song (Battlesong in Canada and the US).