An out-take from City of Lies – Morg’s journey

This is an out-take from City of Lies (The Keepers #2), and tells the story of what happened to Morg when Herro Dan sent her to search for Goldie, Toadspit and Bonnie. I cut it out of the book because it was slowing the story down too much. But I have always liked it, mainly because it gives us a rare glimpse into the life and mind of a slaughterbird.

I hope you enjoy it!

Many miles away, Morg was flying above the ocean. Her great black pin-feathers were spread wide. Her wings beat a steady rhythm, although she had been flying for three days without rest or food.

‘Find Toadspit and Goldie,’ Herro Dan had told her. ‘And Bonnie too. Look for ships and the signs of a big stealing, somewhere out to sea. If you can’t find them there, go to the cities.’

And then he had flung her into the air and turned away, drooping like a lost fledgling.

Morg liked Toadspit. His head feathers were so black that he might have been one of her own chicks, and she had always thought it a pity that he refused to learn to fly. But she had seen no sign of him so far.

She flexed her wingtips, knowing that she would have to find something to eat soon, or she would begin to weaken. Her head turned this way and that, scanning the horizon. Nothing. Nothing. Noth—

Her great beak jerked around. A small island lay to the east, looking no bigger than the speckle on an egg. But there was something down there. She could feel it …

She let herself drift into a long glide. The wind blew her off course several times, and by the time she reached the island, the sun had shifted three wing-breadths across the sky. The coolness of day-end crept under her feathers. She was hungrier than ever.

The stink hit her so suddenly that she nearly fell out of the sky. At the same time she heard a loud squawking of gulls. Ancient memories roiled through her, driving out all thought of the task Herro Dan had set her.

She landed with a thump on whatever it was the gulls were fighting over. They squawked at her, and tilted their red beaks, as if they thought they might scare her. But when she ran at them they scattered like mice, lifting up into the air and hanging above her, screaming. 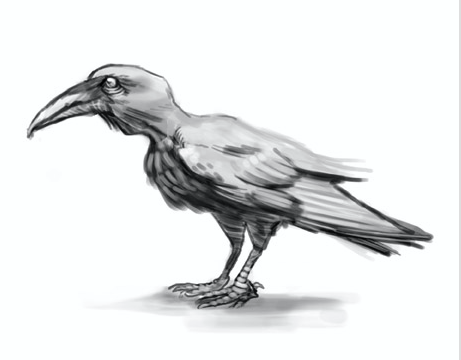 Morg peered at the thing that lay under her claws. Her memory had not failed her. She was standing on the carcass of a whale. A glorious, rotting, stinking whale, laid out for her in a feast that would last for days.

One of the gulls, braver than the rest, landed on the whale’s head. She ran at it, beak agape, and it threw itself into the air in panic.

Then she drove her beak into the tattered flesh and, forgetting everything and everyone else, she began to feed.

Morg could hardly remembered when she had gorged herself so well. A hundred years? Two hundred?

She perched on a giant rib that was almost stripped of flesh, and lazily spread her wings. The sea breeze tickling at the base of her feathers reminded her of something. What was it? Ah, yes. It was like being scratched by the boy chick, Toadspit.

Herro Dan’s instructions were coming back to her now. She turned her head and began to groom herself thoughtfully. It would be a pity to leave the whale carcass. It might be a long time before she came across such a treasure again.

But truly, she had eaten all she could. And Toadspit might still learn to fly, if she could find him before he grew too old and set in his ways. Perhaps she would look for him along the coast. She had had enough of the open sea for now.

She rustled her tail feathers back into place and launched herself into the air. She circled twice above the dead whale, screaming threats at the gulls below. Then, satisfied that they would not forget her, she turned east and began to fly heavily towards Spoke.