After a couple of weeks of laziness, and another couple of weeks of meandering gently through ideas for Book #2, I’ve just got the edits for the first book in the Accidental Bodyguards series back from my editors. So it is full steam ahead!

It’s actually a bit intimidating, getting edits like this. One of their comments was that the current story was a bit complicated, and could I please get rid of something – maybe the war?

I’d thought of that already, so wasn’t particularly surprised. The trouble is, the war is a really important part of WHY things happen. So getting rid of it means I have to find another WHY. No luck so far, so I’m nibbling at some of the other problems, hoping that something brilliant will drop down in front of me very soon.

I’m also not sure how I’m going to get rid of Tutor Voss – or rather make him a lot less important. I can see the reason – it’s just a bit problematic doing it. I am going to have to do some heavy duty thinking over Christmas!

Meanwhile, a couple of days before the editorial comments arrived, I was blissfully playing with my own spit. All in the name of research.

When I was a kid, we used to make invisible ink out of lemon juice. You dip the pen nib in the juice and write the message. When it dries, it’s (more or less) invisible. To read what it says, you heat the paper over a flame (taking great care not to set it on fire and lose the message forever) and the lemon juice turns brown.

Of course if you’re enslaved, you probably haven’t got any lemons. So I thought I’d try a couple of other things. First, vinegar. That worked well too. But you might not have any vinegar either.

So what will you have, no matter where you are? Spit, of course. (And urine, but I decided not to test that one.) But surely spit wouldn’t work as an invisible ink?

‘Hmm,’ I said to Harry. ‘Better do some research. Here, dribble into this egg cup.’

Harry refused, so I had to do it myself. Then I found a pointy stick – because most slavers won’t hand over a pen and nib – and set to work. Here are my results: 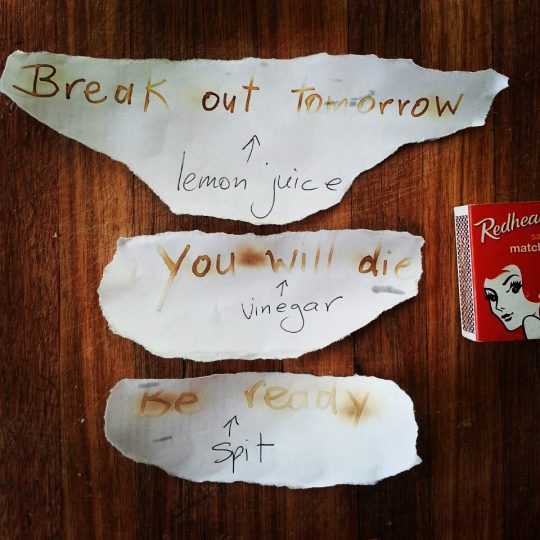