I started on the second book in the Bodyguards series this week. It wasn’t a serious start. I played around with a scene involving the slave traders, and then I wrote a scene about a chicken, and then I realised that a chicken probably wouldn’t think like that, so I rewrote it.

The chicken was feeling very strange. She’d been feeling a little bit odd ever since they’d left the strong-hold, especially when she was anywhere near Farmboy or Clevergirl. But now that oddness was far worse.
She didn’t know what it meant. She’d been happy in the strong-hold, especially when Healerboy had rescued her from the kitchen, just seconds before she was due to become the Margravine’s dinner. As a chicken, she hadn’t had to think about much. It had been mostly, Worms, mmmm! And, Breadcrumbs, mm-hmmm! And, Dogs! Eek!
Ever since she’d left the strong-hold, however, she’d found herself thinking a lot more. And some of those thoughts weren’t chickenish thoughts at all.
Worms, mmmm! Grass seeds, mm-hmm- Wait. Ghosts? Ghosts on the wind?
What’s more, she could see a shininess around both Clevergirl and Farmboy. A familiar shininess.
She tried to ignore it, but she couldn’t.
She tried to remember why it was familiar, but she couldn’t do that, either.
So she had stayed close to them, all the way south.
But then they met the badmen. And now they were trussed up like a brace of hens for roasting, and thrown into the cart, along with Healerboy, Warrior and Bigman.
The chicken was about to fly up next to them when she noticed one of the badmen creeping towards her with his sharpstick in his hands. ‘Chicky chicky chicky!’ called the badman. ‘Come to papa! Chicky chicky!’
Eeek! thought the chicken. And she dashed away from the grasping hands, losing a couple of tail feathers in the process, but hanging onto her life and her head.
She hid around the corner of the farmhouse, with the cat, watching. She got distracted a couple of times- Mm, earwig!
-but the cat cuffed her with a large paw-
Eeek! Badcat!
–and brought her attention back to the cart and its load.
And now the whole thing was moving away, and the cat was slinking after it in the long grass.
The chicken considered her options. Her wing was completely healed now. So she could stay here …
Earwig!
Or she could follow Farmboy and Clevergirl. Which also meant following the badmen and their sharpsticks.
Eek!
Staying here was obviously better. But something drew her after the cart, all the same.
With a sigh, she snapped up one last earwig. Then she put her head down and dashed out of the farmyard.

In the early drafts, fun is a Really Good Thing. Which is why this particular draft is called the Play Draft rather than the This-Is-Serious-And-You’d-Better-Get-It-Right-First-Time Draft. Mucking around is good for the imagination. Mucking around takes you off in strange and magical directions, which is where I want to go right now.

I’ve got a bit of an idea where this particular book is heading. I know there’s a new and important character, and a new and important setting, plus some very important discoveries. I’ve got three big scenes (one of them is the slaver scene), and I know where this book ends and where the next one begins. But I don’t know much about what comes in between all those bits.

That’s where playing comes into its own. Letting my imagination loose.

I’ve got a couple of useful tools to help me along. The first one is the word box. 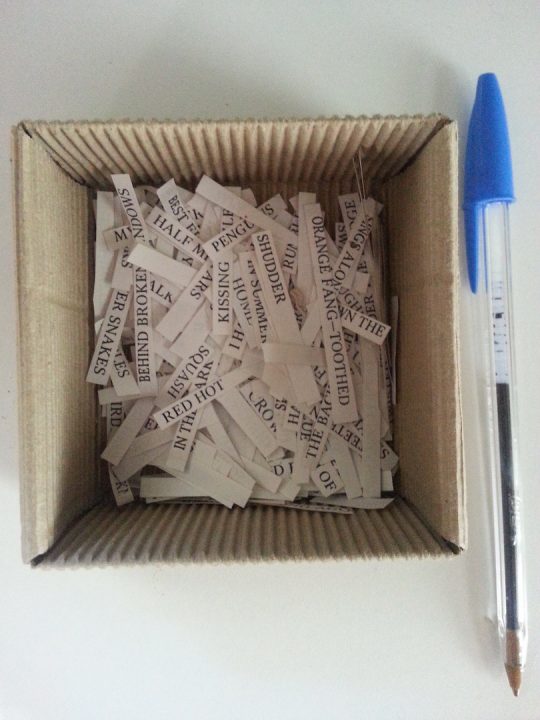 I made this years ago when I was teaching writing at Adult Education, and I’ve hung onto it ever since, just because I like the idea of this little cardboard box with all these odd and interesting words in it. But now it has come in useful. When I’m a bit stuck, and my mind is bogged down, I close my eyes, dip into the box and take out two words. Then I start writing about those words and see where they take me.

The other useful tool is a rambling sort of research. The internet is wonderful for this, but so is my home library. Yesterday I dug out a stack of books that might be vaguely related to what I’m writing about. 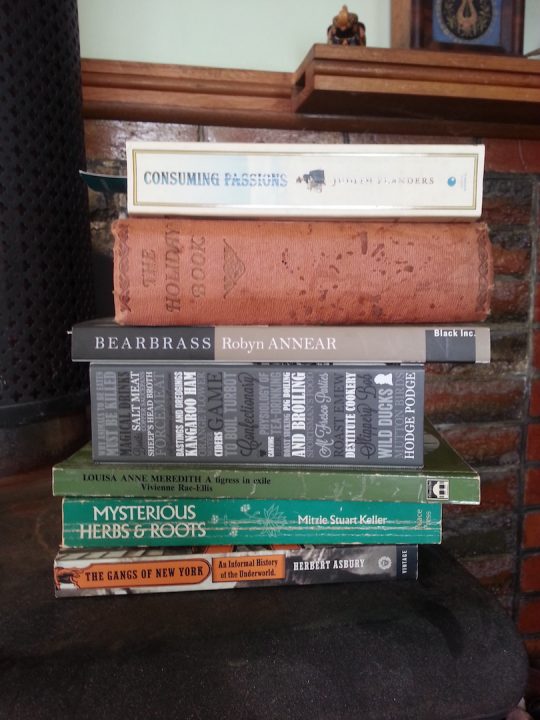 The first thing I discovered (in Consuming Passions, by Judith Flanders), was that in England in the early 1700s, anyone who wanted to put on a play had to give it to the Lord Chamberlain first, for censorship. This law came about because of a play called The Festival of the Golden Rump, which was about King George II and his piles.

Will this delicious bit of information influence the play draft? Who knows? But it made me laugh.

Tomorrow I’ll go back to Book #1 for (hopefully) a final read-through of the structural edit. If it’s all fine, I’ll send it back to my editor – a month ahead of schedule!