I’ve been on Bruny Island for the last week. It was supposed to be a working holiday, and I did a bit of work on Secret Guardians, but it’s hard to stay focused when the view from your office is like this. 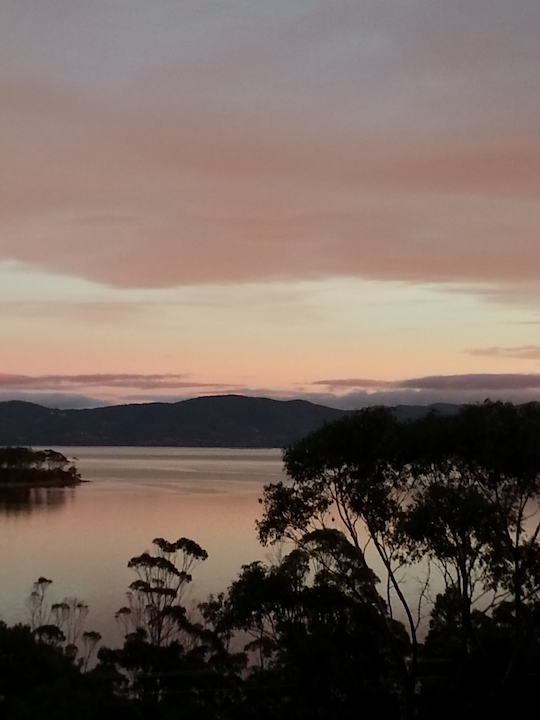 It made me realise how much I love being able to look out my window and not see any other houses.  And waking up in the morning to no sound except birdsong.

Late on Tuesday morning I dropped in on Bruny Island Primary School to give them some books, and the librarian said, ‘What a pity you weren’t here this afternoon. Grades four, five and six have a library session this afternoon, and you could have been our show-and-tell.’ I haven’t done a school visit for a while, so I said, ‘What time do you want me here?’ And that afternoon I spent half an hour talking to the nicest group of kids you could imagine. I also gave them a sneak preview of the cover for Accidental Rogues, which no one except me has seen. And they liked it!

The only downside of the week was, I didn’t have an Internet connection, so on Wednesday I took myself to the local pub, which had free Wi-Fi.  Checked my email and found a message from my American publishers, with the first review for Battlesong (Fetcher’s Song in Australia and New Zealand), from School Library Journal.

I can’t show it to you yet, because this edition of SLJ isn’t out until June 1, but I can tell you that it was a starred review (which is a very good thing), and that it included phrases like ‘unparalleled world-building’ and ‘masterly writing’. So I came away from the pub feeling very pleased with myself and the world.

I’m back home now for a week, then off to Sydney and Melbourne for a couple of days to talk to booksellers about Accidental Rogues.  And I really must get stuck into Secret Guardians. I feel as if I’m a bit behind on it, so will have to write faster!