The trouble with possibilities

This post was supposed to go up a few weeks ago – in fact I thought it had gone up. But when I went to look for it, it had disappeared. I’ve just realised that instead of clicking on ‘new post’, I clicked on ‘new page’. So I’m going to repost it, because it’s still relevant. Here it is:

For a while now, I’ve thought I knew what I was going to write when I finished the Rogues trilogy. I’ve even talked about it as the Book That Wants to Be Written Next. But as that time gets closer, I get less certain.

The thought of finishing the Rogues delights me, partly because it’s always nice finishing something, and partly because I’ve been working on it for three years now, and coming to the end of it opens up so many possibilities. Plus I’m bursting with ideas – here are the early notebooks for some of them. They’re all interesting, they’ve all got potential, they’re all begging to be written. 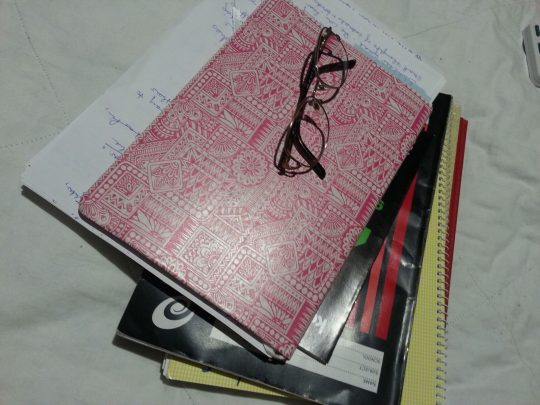 Which creates an unexpected problem. How do I decide which one it’s going to be?

I’ve been worrying about it for the last couple of weeks, turning it over and over in my mind. But yesterday I remembered something really important: I can’t make this sort of decision by rational thinking.

I’ve been in this situation before, though probably not with such an embarrassment of choices. And whenever I try to push one of those choices to the front, because that’s the one I think I want to write, I end up in a mess.

It’s a bit like a small theatre company trying to put on a play that the director loves and everyone else hates. The director (my thinking self) is wildly keen, and pushes ahead believing that everything is going to be all right. But the actors and designers and everyone else (my creative self, my subconscious self – in other words, all the really important bits) are sulking and going slow, and after a while the whole thing creaks to a halt. Or crashes dramatically. Or goes up in flames after a bit of late-night sabotage.

So I’m trying really hard to stop thinking, and to remain in a state of openness, with some mild curiosity around the edges. And to trust that the book that really wants to be written will climb to the top of the pile and announce itself in unmistakable tones. Plus a few trumpets to catch my attention.

It’s surprisingly hard not to think too much.

Added today: I was talking about this to a friend who works with computers, and his experience was exactly the same. ‘I’ve learnt to trust my stomach,’ he said. ‘If someone offers me a project, I always let it sit for a couple of days until the answer comes to me. It’s much more reliable than my brain.’

So I thought this was a creative problem, but it’s not. It’s a ‘how to make good decisions’ problem. Staying with uncertainty and doubts for a while, being willing to tolerate not knowing, instead of rushing after certainty.

(And two weeks after I wrote the original post, I still don’t know what I’m going to write next, though the pile has narrowed itself down a bit.)