Last Wednesday I was guest of honour at Riverside High School’s Writers’ Cafe, in Launceston. This was the celebration of the Write Road project, which involved approximately 50 keen writers from three primary schools. 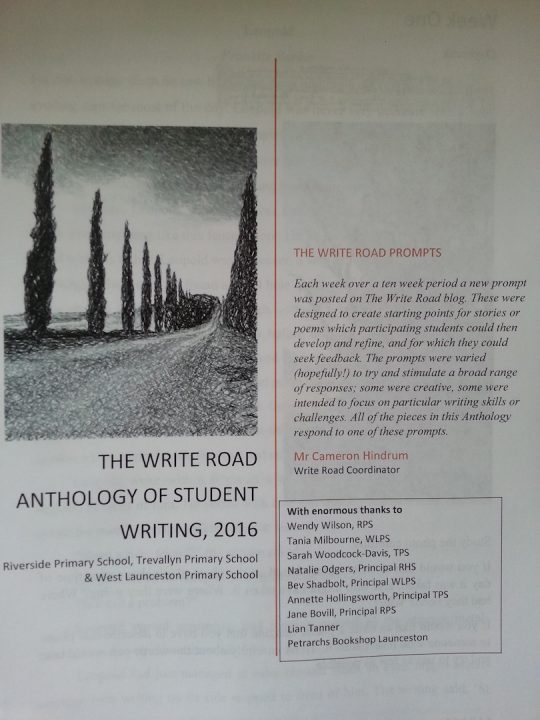 The teacher who invited me suggested that I talk about my beginnings as a writer, but I thought it’d be more interesting to talk about the four most important things I’ve learned along the way.

So here they are:

1. Writers need to daydream. If you want to be a swimmer, you have to swim a lot of laps. If you want to be a musician, you play a lot of scales. If you want to be a writer, you read and write a lot – but you must also daydream. Sometimes we forget this. When I run writing workshops in schools, I ask kids to write a story on the spot. If someone asked me to write a story on the spot, I could – but it wouldn’t be one of my best stories. For my best stories, I have to spend a lot of time daydreaming. Staring out the window at nothing. Going for long walks on the beach by myself. Letting my thoughts stray in wild and wonderful directions.

Daydreaming is one of the most important things a writer can do.

2. Writers need to be risk takers. This one took me a long time to learn, because if you take risks, at some point you’re going to fail. That’s what taking risks is all about. You try something new, you experiment. Sometimes you get it right, sometimes you get it wrong. And I hate getting things wrong.

But the thing is, if you don’t take risks, you can’t be creative. Being creative is all about taking risks.

[At this point I told them about the spiderlings that live on Mt Wellington/kunanyi. At a certain time of year, they spin long threads and throw themselves onto the westerly winds, with no idea where they’ll end up. Some of them fall into the Derwent River and drown. But others are blown across the river, across the Tasman Sea, and even across the Pacific Ocean to South America.

And that’s what we do as writers. We spin a thread and throw our imaginations to the wind, with no idea where they’ll end up.] 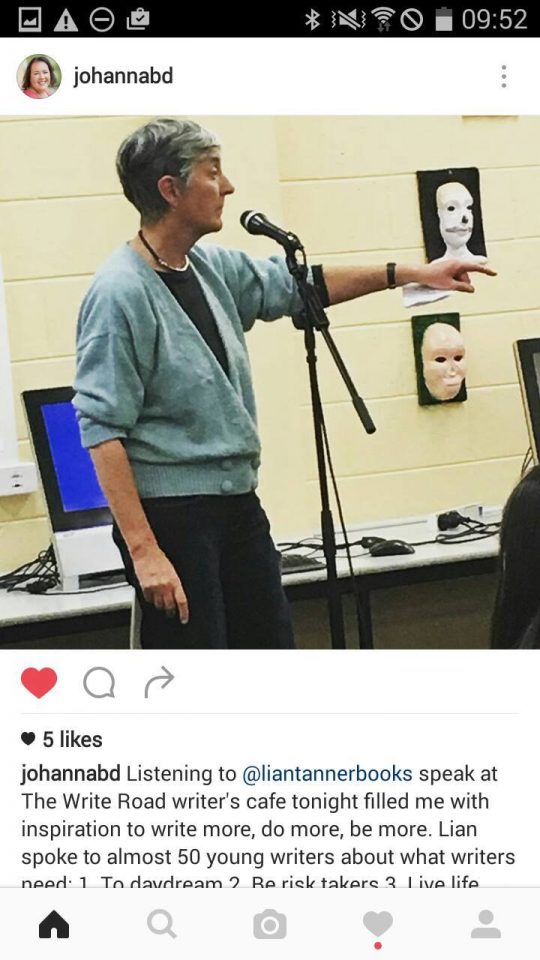 3. Writers must live their lives deeply and passionately. Some people go through their whole life half asleep, hardly noticing what goes on around them. We can’t do that. If we want to be writers, we need to notice everything, both around us and inside us. We need to take notice of what it feels like to be scared, or filled with joy, or heart-broken or so excited we can’t stand still. Because if we don’t feel those things, how will we be able to write about them?

And as well as taking notice, we need to go out and have adventures.

[At this point I told them several stories about when I lived in Papua New Guinea, and taught at a little bush school with 250 kids and three teachers. I told them about our headmaster, Mr Oscar Tammur, who used to train the kids for the interschools sports by chasing them around the oval with a whip. I told them about learning to scuba dive, and how one day, when a couple of friends and I were 30 metres down, a fisherman paddling his canoe above us decided that instead of using his fishing line to catch fish, he’d use dynamite. I told them about the time I helped a special team from Japan search the jungle for a Japanese soldier left over from the Second World War.

I told them that I’ve been arrested for busking in the Hobart mall, back in the days when it was still illegal. That I’ve hitchhiked around Holland and France. That I’ve explored the Paris catacombs, where the bones from all the old Parisian cemeteries are stacked in patterns along the walls of underground tunnels.

I explained that those catacombs turned up in Museum of Thieves as the Place of Remembering. Mr Oscar Tammur inspired the character of Guardian Hope. The scuba diving came in handy when I was writing Sunker’s Deep.

Our lives are our material. They are like a deep well we can draw from over and over again. But only if we take notice.]