This is a terrific festival. It’s only been going for three years, but there were more than sixty authors and illustrators, and thousands of kids and parents. I did four workshops – one at the Shri Ram School, and three at the Indira Gandhi National Centre for the Arts, a big, sprawling space with lots of different outdoor venues. And the Indian edition of Museum of Thieves came back from the printer just in time! Phew! *wipes forehead* 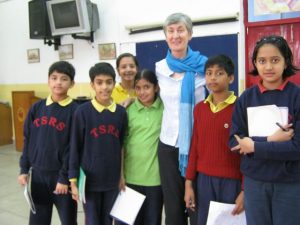 Here I am with the editorial committee of the Shri Ram School magazine. There’s a really nice report on this workshop at the Pratham Books blog.

At the Indira Gandhi Centre, I did three workshops – two on fingertalk and one on mysterious beasts. The kids invented some horribly gruesome beasts and came up with fingertalk conversations that would have fooled even Blessed Guardian Hope. 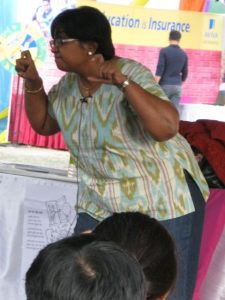 On Sunday afternoon I was feeling battered and bruised after the phone call from my brother saying that Mum had died suddenly, when I walked past a tree with a huge bunch of kids under it, and Jeeva Raghunath up the front doing a hilarious version of ‘We’re going on a lion hunt’. She did it as a sort of rhythmic call-and-response performance, with her saying the line (and doing the action) and the kids in the audience copying her. I stopped and sat down for a bit, because everyone was having such a good time and I needed a bit of a reminder that life goes on. And it was the perfect thing to do. If you ever get the chance to see her, grab it with both hands. 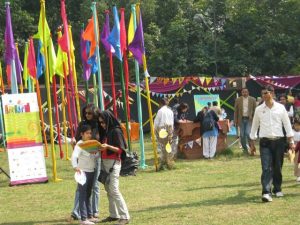 I also met Sarah Prineas, author of The Magic Thief, Leila Seth, who was the first woman judge of the Delhi High Court (amongst other things), Deepak Dalal, who writes adventure stories set in wild parts of India, Robert Sabuda, who creates the most astonishing pop-up books, Ranjit Lal, who writes YA novels on painful topics like female infanticide, and Wendy Orr, one of the other Australian authors.

Oh yes, and the people from Pratham Books, which started in the slums of Mumbai in 1994, and aims to get books into the hands of poor children (they publish in a number of Indian languages, and their books sell for roughly AUS$0.50). And librarian Bandana Sen, who introduces herself as ‘a librarian with GUTS!’

AND I read a terrific romantic comedy, Anuja Chauhan’s Battle for Bittora. A hilariously funny and beautifully written look at a young woman caught up in the heat and dust of an Indian election. Highly recommended.