The Girls in the Basement

I had a good reminder about trust this week. It’s a huge part of writing, particularly with something as long and complex as a novel. Even starting on a novel requires trust that you will be able to finish it, that it will make some sort of sense (after a number of drafts), and that it’s worth doing.

But there’s a deeper sort of trust as well, and it crept up and belted me over the head on Thursday.

I’m writing the new book (henceforth known as Book X) and I’ve got the beginning and the end plotted. But not the middle, which is always the hardest part. Normally I wouldn’t start writing until I’ve got the whole thing done, but this story was gnawing away at me and I really wanted to get started, even though I knew I’d have to stop at some stage and finish the plotting.

So I was up to about 6000 words, and really enjoying it, when something started niggling at me. The heroes were escaping from the villain in the middle of the night, and in my plotting I’d had them hiding somewhere in the town while he (the villain) stormed past. But an insistent voice inside me said it wouldn’t happen like that, because the villain owns DOGS. And surely he’d use one of them to find the runaways?

Except I didn’t want to follow that particular path, because I couldn’t see how the heroes could possibly escape if there was a dog on their trail. There was no convenient stream for them to paddle through, or any other way of putting the dog off the scent. So they’d get caught again, pretty much straight away, which would send the story right back to where it started.

For a little while, I ploughed on with the story I had plotted. But that annoying voice wouldn’t shut up.

American author Jennifer Crusie calls this voice ‘the girls in the basement’, which is the best name for it I’ve ever come across. You could also call it the creative instinct or the unconscious mind, but they sound sober and sensible, whereas ‘the girls in the basement’ has a certain craziness about it. A stubbornness. A sense that if you don’t listen to them, the girls are going to sneak up the stairs and start throwing plates around.

Which they did, this last week.

So in the end I gave in and listened. Then I went back over what I’d written and added one of the dogs, following the scent of the runaways. I had no idea how they were going to escape, not with this ferocious dog (and ferocious man) on their trail.

But as I kept blindly writing, it came to me. Courtesy of the girls in the basement, who, by this time, were sitting around nodding their heads and saying, ‘I told you so.’ And it was way better than what I had originally plotted. What’s more, it foreshadowed the climax of the book in a really interesting way.

It was a good reminder. You’ve got to trust that nagging voice when you’re writing. Because the girls are always waaay ahead of you.

For children. The Storm Keeper’s Island, by Catherine Doyle. I’m not sure if this is the first part of a trilogy or a duology, but it’s a gorgeous book, beautifully written, full of magic and well worth a read. Here’s the cover and the blurb: 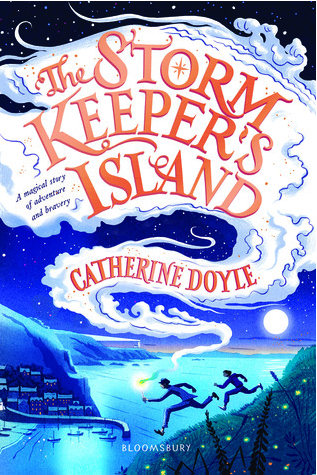 ‘When Fionn Boyle sets foot on Arranmore Island, it begins to stir beneath his feet … Once in a generation, Arranmore chooses a new Storm Keeper to wield its power and keep its magic safe from enemies. The time has come for Fionn’s grandfather, a secretive and eccentric old man, to step down. Soon, a new Keeper will rise. But, deep underground, someone has been waiting for Fionn. As the battle to become the island’s next champion rages, a more sinister magic is waking up, intent on rekindling an ancient war.’